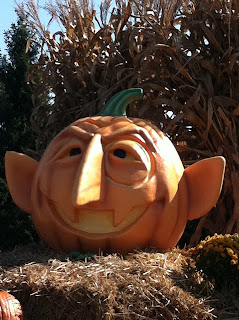 If you’re in the vicinity of Langhorne, Pennsylvania, and have any notions about surprising the kiddies with an impromptu jaunt to Sesame Place for its annual “Halloween Spooktacular” (weekends through October 31st) here are some tidbits I learned from my family’s trip there this past weekend.

1. It’s a great way to introduce your children to the concept of queues. Sesame Place is a theme park, i.e. there will always be lines. But while the waits for rides at Sesame Place are relatively reasonable at other times of year, the Spooktacular crowd was so much larger than usual that trying to move from one attraction to another sometimes felt like we were extras in a horror after they’ve just announced the zombie invasion and everybody’s trying to flee the city at once.

2. Don’t take “preferred parking” literally. It only costs three dollars more than the “general parking” but be aware that there are spaces in the preferred lot that are just as boondocks-far from the gate as the nether realms of the general lot. We had to traverse blacktop, gravel, and dirt, eventually leaving our car on the lawn of what looked like a utility building.

3. There's something for everyone (well, not really). The rides at Sesame Place are designed incredibly well for Sesame's target audience of 2- to 7-year-olds. Adults can get a nice nostalgia kick out of the experience (plus vicarious warm fuzzies from watching the joy on their kids’ faces — if you’re into that sort of thing). And cynical tweens will get plenty of opportunities to roll their eyes — which, let’s face it, is what they’re looking for most of the time, anyway.

The parks’ many water rides cater to a much more all-ages crowd, but this time of year, they’re off the menu (which is why tickets cost $20 less now than they would have a month ago).

4. The Halloween-specific attractions are cute, but don’t quite make up for the lack of water rides. Of the two mazes, the better by far is The Count’s UN-Haunted Castle Maze (that’s “un-haunted” as in non-haunted; not “U.N.-Haunted” as in plagued by the ghost of Dag Hammarskjold). It’s full of fun little tricks like ghostly looking sheets that end up being Telly’s laundry. The other, Abby Cadabby’s Magical Halloween Maze, is really just a long queue to the place where you can get your photo taken with Abby Cadabby.

5. Sesame Place is about the experience, not the rides. My advice: See the parades and shows rather than spending thirty minutes studying the Prairie-Dawn-as-Biker-Chick tattoo on the tricep of the patron in front of you as you wait to get on the carousel. 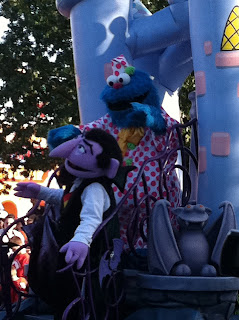 The Neighborhood Street Party Spooktacular Parade was far more fun than it should have been. They go all out, with all the major (and some minor) muppets making appearances in their Halloween costumes (though I found Cookie Monster’s clown costume, which gave him a nose, somewhat disturbing). And this is not one of those march-by-and-they’re-gone parades — these floats stop along the way, so the characters can get down and perform skits.

We also took in The Not-Too-Spooky Howl-oween Radio Show, which featured some surprising good music, like “Every Little Thing She Does is Magic,” “Weird Science,” and  “Thriller” (complete with Elmo doing MJ moves black-and-read leather jacket). Yes, Sesame Street has long been known for its great pop parodies, but I was still surprised to see that quality carry over to the theme park.

6. Dads will get lost in the Nets n' Climbs playground. One attraction you’ll never have to wait in line for is Nets n' Climbs, a huge jungle gym consisting of several stories worth of climbing nets and rope bridges. Whichever of the Spider-Man-worthy paths you take, you’ll end up at a small green turret at the tippy-top, which will inevitably be filled with out-of-breath dads who were foolish enough to think they could keep up with their kids.

7. If you’re going to wait in line for one ride: Super Grover’s Vapor Trail. It’s the parks only rollercoaster, and while it’s definitely on the gentle side, it builds up some pretty decent speed, especially on a series of downward spirals. It’s the rare coaster that won’t necessarily terrify preschoolers, but can still make a tween shrug and concede: “That was kinda fun.”

It was indeed very helpful and insightful while being straight forward and to the point.