It's a Toy! It's a Game! It's Skylanders! – Video Game Review

It’s almost embarrassing how much I enjoy Skylanders. It fills me with a sort of nostalgic glee. Not way-back nostalgia like you get when you encounter pixely old Atari games like Frogger or Breakout; nostalgia for the dawn of 3D gaming and the colorful classics of the Nintendo 64 and the original PlayStation 1. The moment I started playing Skylanders, I realized how much I’d been missing a certain kind of game: Vibrant cartoony graphics, with loads of action and exploration, and whimsical characters adventuring across creatively magical landscapes. Skylanders made me think back to the fun I had playing Banjo-Kazooie, Super Mario 64, Crash Bandicoot, and even the original Spyro the Dragon (the star of which is revived nicely here).

Of course, Skylanders has a gimmick: You place toy characters on a plastic “portal” (which is connected to your game console by USB port) and watch them magically appear in the game world for you to use. During a gaming session, all experience, powers, and money earned by your character are stored on a chip within the figure and will be at the ready next time you play. The game comes packaged with three Skylanders (including the titular Spyro) and you can swap characters in an out as often as you want. And while there’s nothing stopping you from completing the game with just those three heroes, there are twenty-nine others temptingly available for purchase at your local toy and video game stores.

Each Skylander has a completely unique set of moves and powers, upping the temptation factor. And to make matters worse, each character belongs to one of eight “element” groups (fire, water, air, earth, life, magic, tech, and undead [they sort of lose me on that last one]}, and each level of the game has bonus areas that can only be entered by members of certain element. So while you can reach the conclusion of the game with only three Skylanders, you’ll never be able to see all the secret areas. But that doesn’t mean you’d need to buy all 32 characters — as long as you have one of each element, you’re good. Still, at an average cost of $8 per figure, that means you’re paying an additional $40 over the typical $70 for the game starter pack.

So is it worth it? I still say yes. Here’s one of the coolest things about these Skylanders figures and their power portal: They’re truly universal. If you use your characters to play the game on, say, an Xbox 360 and then take them to house of a friend who has the game on a Wii, you can bring your Xbox-primed characters into that Wii game complete with all their earned experience, powers, etc. Same goes for a PS3. You can even use them on the handheld Nintendo 3DS (which has a completely different version of the game, by the way). And whatever game system you have, you can use port your same toy figures into the Web MMORPG, Skylanders Universe (which works on both Mac and PC). This universality is a trend I’d love to see continue.

In addition, the story is fun, the writing can be very clever at times, there are a ton of awesome hidden treasures to find, and the co-op capability makes it a nice game for parents and kids to play together. To be honest, there’s no way I could not love a game in which the villain surprises you with a deathtrap called the Deadly Shark Bath of Doomsharks.

Best for: Gamers keen on early-90s nostalgia; avid collectors; parents looking for light-hearted action for their kids; people with the room to store 32 toy figurines
Posted by Christopher Healy at 11/30/2011 04:46:00 PM 1 comment:

The Fingertips of Duncan Dorfman

There simply aren’t enough good suspenseful dramedies that revolve around Scrabble. So I would like to thank Meg Wolitzer for her new novel, The Fingertips of Duncan Dorfman. As a word nerd myself, I thoroughly enjoyed watching her characters drill one another on anagrams, strategize about ways to use a Q, and puzzle over why a word like “za” is legal when no one in the world actually refers to pizza as “za” (although that’s what the Scrabble dictionary says it means).

But I’m making the book sound like a Words With Friends chat board: It’s not. The plot revolves around a national Scrabble youth tournament and the various pairs of middle-schoolers who trek across the country to out-word one another. It has a somewhat similar feel to one of my favorite documentaries, Spellbound (about the contestants in the Scripps Spelling Bee). And the playoffs in Fingertips can be just as taut and suspenseful as the drawn out letter-by-letter spellings in that film.

It helps that the cast of kids here is extremely likable. You’ve got the titular Duncan, a poor, picked-on boy whose cachet in school rises when a popular kid chooses him as his Scrabble partner. And there’s April Blunt, whose geekish love of words makes her the black sheep among her family of workout-mad triathlete types. And Nate Saviano, a Manhattan skateboard buff whose father — a former Scrabble almost-champion — forces him to play. There are others, too. And you’re not really rooting against any of them, so it becomes almost painful knowing that only one duo can win in the end.

Most of the what goes on in these pages is realistic kids-dealing-with-the-pains-of-being-kids Judy Blume-ish material. But there is an out-of-left-field supernatural-ish twist in that Duncan has the power to “see” with his fingertips. He can read letters sightlessly, by merely touching them. Therefore, he should be able to feel the letters on Scrabble tiles and choose a perfect hand on each turn. The question becomes whether he will use this power to cheat or not. And there’s a lot of tension in the making that decision. Which is all the better for us readers, of course.

Best for: Scrabble geeks; fans of realistic kid fiction who can handle a little suspension of disbelief now and then; outsider-ish tweens and the people who love them.
Posted by Christopher Healy at 11/15/2011 11:11:00 AM No comments: 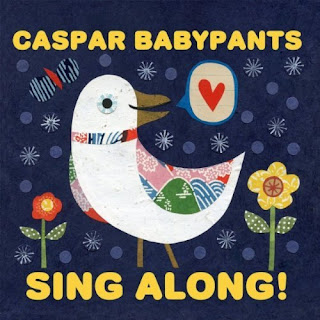 Best for: Young kids who want their music to sound like it’s intended for them; former Presidents of the United States fans; classic kid-tune revisionists
Posted by Christopher Healy at 11/10/2011 09:34:00 AM No comments:

This is a toughie. Stuck is, without a doubt, one of my favorite picture books of the year. I knew the moment I read it that I needed to blog about it. The difficulty comes in figuring out exactly how to review a comic tour de force like Stuck without spoiling the absolutely hilarious running gag that makes the book such a blast to read.

I’ve been a fan of Oliver Jeffers ever since his first picture book, the magically poignant Lost and Found (which was, coincidentally, the very first book I reviewed in the very first issue of Cookie). That book was easy to write about. It is a gorgeously illustrated story about a boy who helps a wayward penguin back home to the South Pole. It, too, has plenty of wonderful subtle humor, but none of it is so intrinsically tied to the plot that a summary of the book would ruin the jokes. And that is the case with Stuck. To explain why Stuck is so wonderfully funny, would be to take away the joy of discovering that absurdist, mildly subversive humor yourself.

Stuck is about a boy who needs to get his kite untangled from the branches of a tall tree. To say more than that would be too much. What happens next is so simple — and so unbelievably silly — that it’s pure genius. Like the best sketch comedy, Stuck manages to take one basic joke and keep building upon it and enhancing it for bigger and bigger laughs. It’s laugh-out-loud stuff. You’ll just have to take my word for it.

Best for: Fans of The Simpsons or perhaps even Monty Python; anyone who understands that humor can be sophisticated and silly at the same time; kite lovers.
Posted by Christopher Healy at 11/03/2011 03:53:00 PM No comments: